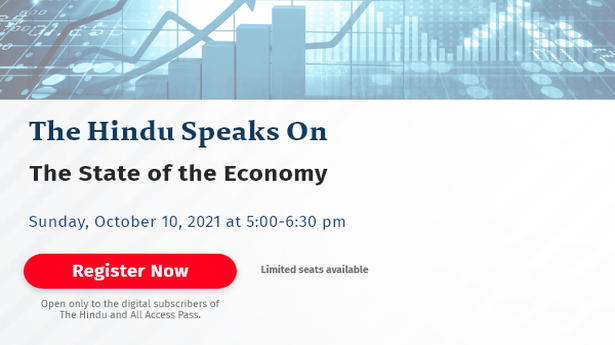 Buffeted by the pandemic and sectoral points, it has not been a easy crusing for the Indian economic system within the final a number of quarters. Are the storms subsiding now? What are the touchstone points for the state of the economic system now? We might be coping with these questions and extra within the second version of The Hindu‘s unique webinar collection for our digital subscribers.

In The Hindu Speaks On The State Of The Economic system webinar to be held from 5 p.m. to six p.m. on October 10, our digital subscribers can work together with our Financial Editor Vikas Dhoot.

Vikas Dhoot is The Hindu’s Economics Editor since 2015, with a quick stint heading the paper’s Mumbai version. In his 25 years as journalist, he has traversed between Mumbai and Delhi in search of to attach the dots between the coverage shifts within the capital and developments within the business hub. He has received the CNN Younger Journalist Award for South Asia and the Ramnath Goenka Award for Greatest Financial Journalist. Vikas has had a ringside view of India’s economic system from the distinctive views of Dalal Road, North Block, Parliament Home, and the untold areas in between.

In case you are a digital subscriber of The Hindu, please register for the webinar right here.