Robust motion being taken in opposition to these serving to terror teams: NIA Chief heading in the right direction killings in Kashmir 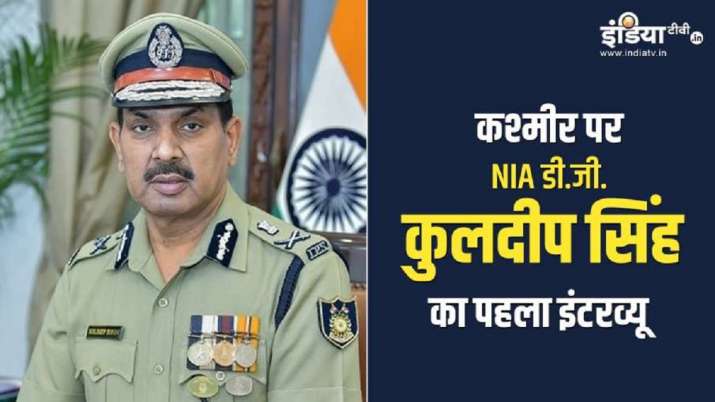 It doesn’t matter what terrorist organisations plan or do, they can’t create an environment in Jammu and Kashmir which was earlier than the abrogation of Article 370, mentioned Nationwide Investigation Company (NIA) Director-Basic Kuldeep Singh, in an unique dialog with India TV Editor-In-Chief and Chairman Rajat Sharma in Aaj Ki Baat.

Talking on current terror assaults in Kashmir the place terrorists resorted to minority goal killings, NIA chief Kuldeep Singh termed such acts as cowardly assaults saying it is their frustration.

“The recent target killing of civilians in Kashmir is a sign of frustration by Pakistan-sponsored terrorists post the abrogation of Article 370,” NIA DG Kuldeep Singh mentioned.

A number of actions have been taken by safety businesses in Kashmir after the abrogation of Article 370 which has helped normalcy to return within the valley, nevertheless, terrorists have additionally resorted to completely different methods and considered one of them is minority goal killings.

However these goal killings can not happen with out terrorists being guided by some sympathizer, being offered shelter, or assist from over the bottom employee, NIA Director-Basic mentioned.

“There are some terrorist organisation such as Lashkar, Hizbul Mujahideen, Al-Badar, PFF and others. So when members of these terror organisations indulge in terror activities, the J&K police do file cases against them, and if they feel that some unlawful activities act is being invoked then they write it to the government following which NIA starts its investigation,” NIA DG talked about.

NIA chief Kuldeep Singh mentioned, “terrorist organisations who remain indulge in some terror activities and those who support or help such terror organisations which is a crime… so earlier there used to be no case against them… but when security forces and intelligence agencies informed Government of India about such acts, it took note of it and after its direction, a criminal case was started on October 10.”

Additional talking extra on current terror assaults, Kuldeep Singh mentioned, “terrorists thought that if minorities are targeted, then disruptive forces will emerge, panic will spread among the people and the atmosphere will be spoiled. But they will not succeed.”

“Challenge always exists in the Valley. But it is being tackled in a constructive and fruitful manner,” NIA DG Kuldeep Singh mentioned.

ALSO READ | ‘Hindutva is one and would stay the identical until the tip’: Mohan Bhagwat at Veer Savarkar e book launch