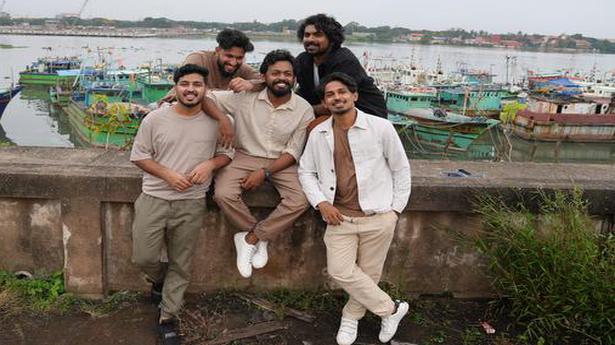 Ainthinai is the most recent addition to the rising tribe of indie bands from Kerala. The five-member acoustic band just lately launched their debut single, ‘Vaasam pesum’, a Tamil quantity.

‘Ainthinai’ is the idea of 5 geographical landscapes talked about in Sangam literature – kurinji (hills), mullai (forests), paalai (desert or dry areas), marudam (crop land) and neithal (coastal terrain). “Our songs are about people, environment, flora and fauna, soil, culture…. We wanted a name connected with that. Also, it had to be a title that would make people think. That is how we zeroed in on Ainthinai,” explains Athul Subrahmanyan, lead vocalist, bass guitarist and lyricist of the band.

The band sings in Tamil. “We agree that the language is poetic and that aspect resonates with the themes of our songs. We are confident that listeners will be able to understand the content because the lyrics are simple,” says Athul.

9 extra songs are prepared for launch. ‘Vaasam pesum’ is about love. ‘Sirikkanam’ is on smiles, ‘Thaaye’ is devoted to motherhood, ‘Manithan’ exhorts people to interrupt free from oppression and ‘Ooru’ is a journey music. ‘Vazhkai’ celebrates the fantastic thing about earth. ‘Vidu’ is a name for freedom.

Thomas provides: “The output is better when we have Tamil lyrics. Also, we needed a folkish sound for our music and that comes across in Tamil. Original content is getting more acceptance these days, especially with social media giving a platform for artists to promote their work.”

The fivesome had met in music circles of Kochi. They began jamming collectively and carried out at cafes in and round Kochi. The dream was to kind an acoustic band and do unbiased productions. “We played both original songs and covers. We were surprised by the appreciation we got for the originals,” says Rahul. The group makes particular notice of Shiyas MM, who supported them by letting them play at his dine-in place at Aluva, which they nonetheless do. “We started working more on our own songs. After a gig at a cafe at Kakkanad, our confidence was on a high. We realised that we were on the right track,” says Sarath.

The pandemic and lockdown introduced every part to a standstill, together with their follow periods at Aluva, the place a lot of the members hail from. Nonetheless, as soon as the restrictions had been lifted they regrouped with a plan.

“We knew that nobody was going to reach out to us in that scenario. So we decided to approach cafes in and around Kochi looking for opportunities to perform. Being an acoustic band, we just had to walk in with our instruments,” says Rahul. “We had confidence in our music, but did not know how to go about promoting it. The only option was looking for a space to present our work,” provides Cebe.

That call struck gold. At Edam Artwork Café they’d an opportunity assembly with singer Sithara Krishnakumar, one of many companions of the café. The identical night, she launched them to artist/occasion administration group of Wonderwall Media, which manages her and different main bands/musicians resembling Thaikkudam Bridge, Agam/Harish Sivaramakrishnan, Karthik and Sachin Warrier, amongst others. “They listened to our songs and took us on board. Our life turned upside down that day,” says Cebe. They did two exhibits at Bolgatty, Kochi and one at Kovalam in Thiruvanathapuram.

The group can also be taking a look at selling a brand new music tradition. Earlier than each necessary gig, they plant a sapling on the venue. They plan to carry music workshops. “There are areas where people have not seen music instruments at all. So we intend to interact with them and show the musical instruments or teach them how to play. We also want to take something from their music culture,” says Athul.

On what retains them collectively, Cebe says, “We have personal preferences when it comes to music and creative differences when we sit down to compose. But, after a point, we always reach a consensus. There is something special that binds us, like a family.”

Take heed to ‘Vaasam pesum’ on YouTube and Spotify.