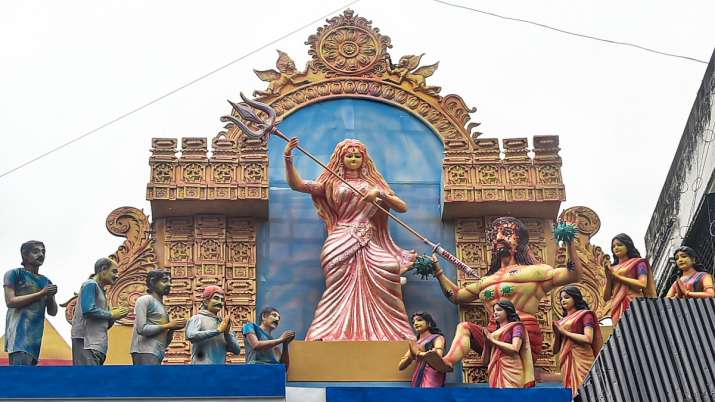 Forward of Durga Puja celebrations, the Delhi Air pollution Management Committee on Wednesday prohibited idol immersion in any water physique and requested folks to immerse them at residence in buckets or containers, saying the ensuing air pollution in rivers and lakes was a matter of concern.

“Idol Immersions shall not be allowed during the forthcoming Durga Puja in any public place including river Yamuna or any other Water Body/Public Place/Ponds, Ghats. The idol immersion ritual may be performed within the home premises in a bucket or container,” it stated in a notification.

It additionally forbade using plaster of paris (PoP) or baked clay for making idols and insisted on using solely pure supplies like conventional clay, noting that the chemical paints, colors and dyes utilized on such PoP idols include hazardous chemical compounds which trigger dangerous results on aquatic life, which when consumed by people might trigger most cancers and different ailments, together with respiratory illnesses, pores and skin infections, amongst others.

“ldols needs to be made solely from pure supplies as described within the holy scripts. Use of conventional clay for idol is permitted.

Use of baked clay, plaster of paris, amongst others, in idol making is hereby prohibited,” it stated.

The Delhi Air pollution Management Committee (DPCC) additionally discouraged portray of idols and stated in case idols are to be painted, solely water soluble and non-toxic pure dyes needs to be used.

“Use of toxic and non-biodegradable chemical dyes for painting idols is strictly prohibited,” it stated.

The DPCC additionally stated that worship materials like flowers, adorning materials (manufactured from paper), amongst others, be eliminated earlier than immersion of idols, and could also be collected individually for disposal in an environmentally protected method like handing over to door-to-door waste assortment automobiles.

It additionally directed that composting of biodegradable materials be carried out at residence, if potential.

With these instructions, the DPCC directed all of the companies involved to submit an Motion Taken Report each Friday and that the violators shall be punished.

“It may be noted that the violation of directions issued under Section 33 A of the Water (Prevention and Control of Pollution) Act, 1974, or the rules made there under shall be punishable under section 41 of the said Act which include imprisonment up to six years and with fine,” it stated.

It additionally stated that in view of a directive issued by the Nationwide Mission for Clear Ganga (NMCG) on September 16, 2019 prohibiting idol immersion in Ganga and its tributaries, violators are required to pay Rs 50,000 as Surroundings Compensation.

“As per guidelines for Phased Re-opening issued by the Ministry of Home Affairs order of September 30, 2021 to extend existing orders issued by Delhi Disaster Management Authority, social/political/sports/entertainment/cultural/ religious festivals related gathering and congregations are not permitted and the same needs to be followed in letter and spirit,” the DPCC added.